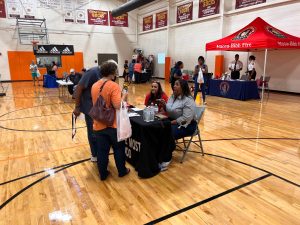 Over 400 people in our community took steps to prepare for an emergency by attending the Emergency Management Agency (EMA) Emergency Preparedness Fair on Saturday, September 17 at the Frank Johnson Recreation Center.

Families were able to learn good practices to prepare for and act in the event of a disaster. People learned preparedness tactics such as writing emergency plans and mapping their evacuation routes, preparing disaster kits useful during a quick evacuation, basic CPR training, safety basic fire, etc. case.

“I’m so excited that the first-ever EMA Readiness Show went so well,” said EMA Director Spencer Hawkins. “We had over 400 attendees, many of whom came just to understand how to prepare for disasters. I can’t say enough about Moranda Guy and his team in executing this event. They knocked it out of the park.

LITHOPOLIS − There’s a simple reason why new RE/MAX Apex co-broker Megan Bell loves selling real estate. “It’s being able to start from point A to put everything in place so that someone finds their forever home or sees them sell their house for their next dream,” said Bell, who is licensed in Ohio, Kentucky […]

By James Coats | Collaborating columnist If someone had asked me what I thought I was doing six years after getting my MBA from Cal State San Bernardino, I would have said: help business owners improve their bottom line, identify ways to engage more effectively with customers or reviewing new business. projects as a business […]